For sale is this early Qing dynasty hand-painted brush pot from Yongzheng Emperor reign 1722 to 1735. This antique Chinese brush pot has the most beautiful hand-painted decoration of colourful flowers and exquisite butterflies. All the colourful and masterfully painted flowers and insects are set on a white ground background that accentuates the artistry. It’s one of the nicest I have seen and really catches the eye with it’s expert craftsmanship. On the base of the pot is the crisp and clear Yongzheng Mark and Period.

About The Yongzheng Emperor

Born 1678 and with the birth name of Yinzhen he became the fourth Emporer of the Qing dynasty at the young age of 24. The Yongzheng Emperor reigned between 1722 to 1735 and was considered a hard-working Emperor. 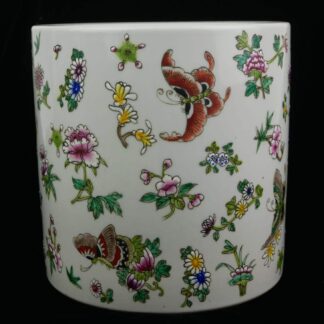