A really good example of Chinese censer bowl history in the form of this large bronze tripod censer bowl made between the 17th-18th century and with the full Xuande six-figure apocryphal mark underneath. This is an old bronze censer used for burning incense and is large than most and probably used in an establishment of the time rather than for personal use.

Dating from around 1600BC Chinese bronze censers have been used for cooking and as sacrificial vessels. They are often crafted from bronze, copper, porcelain, or stone. By 10AD the three-legged bronze ding had been adapted as vessels to hold ceremonial offerings, and eventually became the prototypes for incense holders 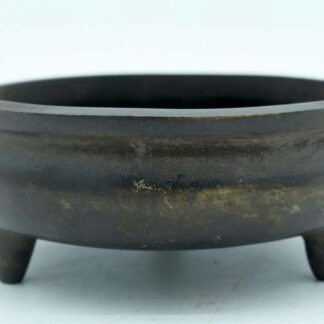