This ginger jar style vase is simply stunning and bears the four-character Yongzheng mark in iron-red to the base on a teal glaze. The Yongzheng Emperor (named Yinzhen at birth) ruled between 1723 to 1735. He was the fourth son of the Kangxi emperor. He consolidated power by being hostile to his brothers and their supporters.

This jar looks absolutely stunning with the polychrome enamel colours as vibrant now as they were when they first painted. The painted scenes depict Chinese warriors on horses and foot with weapons. Behind these are flag carriers bearing different coloured flags. Towards the base of this Yongzheng jar is an ornate and colourful border on a teal glaze background. 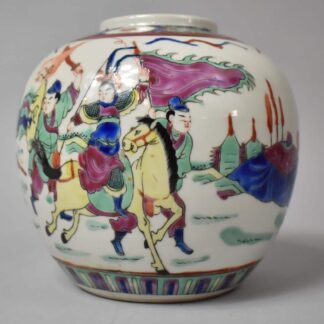