A superb and rare Wemyss ware pottery Tyg, decorated with black cockerels on rich green grass originally retailed by Thomas Goode & Co. A tyg (or tig) is a large English pottery mug with three or more handles dividing the rim into sections for several drinkers. This particular Tyg is made by the Scottish Wemyss ware company and dates c1900. This Wemyss Tyg has the Wemyss marks to base as well as the Thomas Goode & Co stamp. There is restoration to two handles.

A Scottish man named Robert Heron started Wemyss ware in 1882 when he introduced Bohemian craftsmen into his Fifie pottery factory. The name Wemyss was given to the new style of pottery in honour of the Wemyss family of the nearby Wemyss castle, who were early and enthusiastic patrons of the ware. The most outstanding feature of the ware is the free-flowing and naturalistic hand painting.

Established in 1827, Thomas Goode & Co. is a London institution, long recognised as a byword for opulent luxury and exquisite craftsmanship. Thomas Goode & Co. have occupied 19 South Audley Street since 1845 and first opened their doors to Mayfair’s retail customers back in 1875 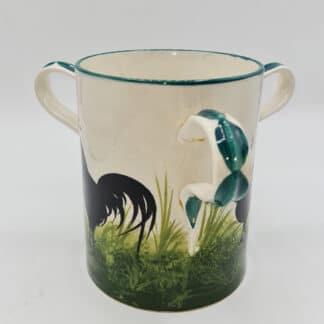