Here is an early 20th century set of 6 old imari-designed porcelain handled fruit knives in the original box with the original insert leaflet and one boxed matching imari-designed cake slice. All are in immaculate condition. The Imari design is the older Royal Crown Derby one and adds to the collectability of the items.

Royal Derby Crown was first established in the year 1750 and became known for its exquisite Fine Bone China. It’s uniqueness, creativity and unmatched skills made Royal Derby Crown one of the finest Bone China manufacturers in the world with it’s wares decorating many of the world’s top hotels and restaurants. 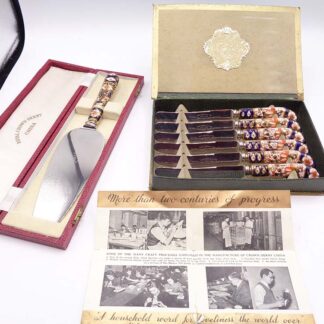