A large 28cm high Moorcroft baluster vase with the Anemone pattern design hand painted on a blue ground. The vibrant Anemones are in various stages of bloom and the colours of cream, plum, red and blue against green foliage are set on a dark blue ground. It’s a stunning Moorcroft vase and would look amazing in any room.

This vase is No 34 out of 94 ever made in this shape pattern by Moorcroft which makes it more sought after. Vase collectors and Moorcroft fans snap up limited edition pieces as they are rare so don’t waste time and snap up this prize Moorcroft vase today.

This limited edition vase was produced at the Moorcroft factory when Rachel Bishop was the main designer in 1995 and has the flag symbol denoting this time period. There are the usual Moorcroft factory marks on base.

Financed and owned by the famous Liberty Ceramics company until 1962, when the Moorcroft family purchased the company, Moorcroft has been a top-quality ceramic company since its early beginning in 1912. Since then, it has been appointed as “Potter to HM Queen,” and the name has gained worldwide recognition for superb designs and quality. Moorcroft is a very collectable pottery brand, with certain Moorcroft pieces reaching as high as five figures. 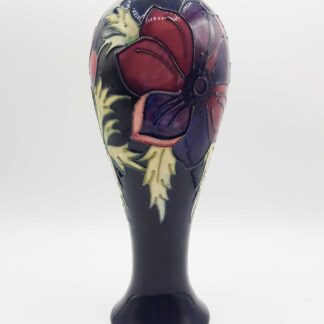