John Bennet was made watchmaker to Queen Victoria, and also clockmaker to the Royal Observatory. He lived between 1814 to 1897 and was recognised as one of the most advanced watchmakers of the time. His main notion was that the Swiss internal workings of the watch were better than individually designed watch internals. Using Swiss-made parts meant that replacement and maintenance would become easier.

About This Pocket Watch

This watch bears the rare British Coat Of Arms with a Crown, Lion & Unicorn along with the British Monarch’s moto in Middle French “Honi soit qui mal y pense” which means ‘Shame On The One Who Sees Something Evil In It’. Further below the coat of arms is the following text in Latin “Dieu et mon droit” which means ‘God And My Right’. Then under all this is the makers mark – Sir John Bennet & Co 65 & 64 Cheapside, London.

The watch bears the British silver hallmarks and comes in the original white metal carrying case with ornate border designs.

The watch works and ticks, the case has some wear which is normal for age and use. 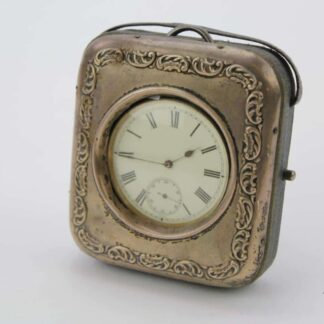