George V acceded to the throne on May 6th 1910, on the death of his father Edward VII, all British coins dated 1910 continued to use Edward’s portrait. 1911 was the first year coins were issued with George’s portrait; this was also his coronation year. There are two types of George V gold sovereigns, the first type being issued from 1911 to 1928 inclusive and referred to as the first, large portrait. In 1911, sovereigns were issued at the Royal Mint, London, and Melbourne, Perth and Sydney in Australia, and also Ottawa in Canada. The London “Branch” of the Royal Mint never used a mintmark on sovereigns.

The new bust of George V featured on the 1911 sovereign is the work of Bertram MacKennal, an Australian born in Melbourne in 1863. The King’s bare head is facing the left and the letters B.M. are at the bottom of the truncation.

The reverse is the continuation of Benedetto Pistrucci’s classically beautiful St George mounted and slaying the dragon with a sword. The sovereigns are dated at the bottom with the letters B.P. to the right. 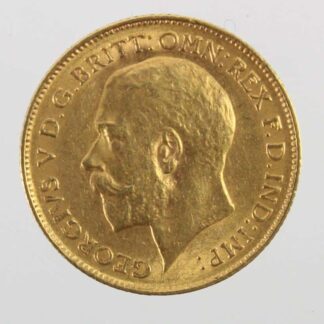