For sale is this late 18th/early 19th century Chinese Canton hand-painted vase. The vase has a matching domed lid with a gilt finial. Around the neck of the vase in raised gilt relief in the form of two dragons chasing a raised relief red pearl above a hand-=anted scene of a Chinese man in rest. The body of the vase has two main panels, the front panel depicts a scene of Chinese women in a house garden setting. The second panel features a scene of foliage and colourful bird and butterfly. The borders of the panels and the neck are done in the Famille Rose style with foliage and pink flowers.

This is a really nice example of masterful Chinese Canton ceramic craftsmanship, and the raised gilt relief designs really make this vase stand out. 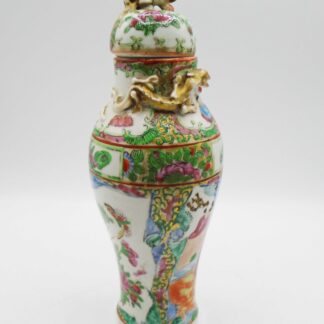