A very collectable, early hammered antique silver cross penny of King Henry II in a plastic coin holder. The Short Cross Penny was issued from 1180 in the reign of King Henry II (1154-89) until 1247 in the reign of King Henry III (1216-72). This coin is a very old coin from Henry the Second, the first Plantagenet King of England. This coin is of the “Short cross” type, and was struck by the moneyer named “Alain” at the York mint between the years 1180-1189. In this period, moneyers had to have their name on the coin to assure quality control. 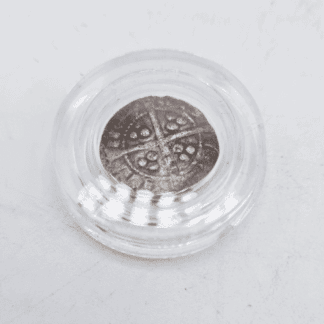